Moraira will be celebrating their Fiesta in honour of the 'Virgen de los Desamparados' and the 'Virgen del Carmen' during an annual fiesta in July 2023. See below for more information. 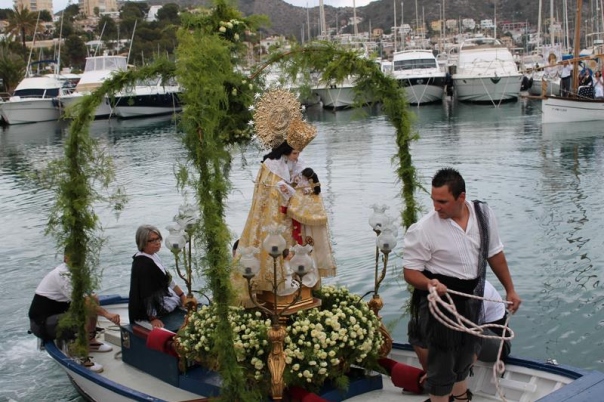 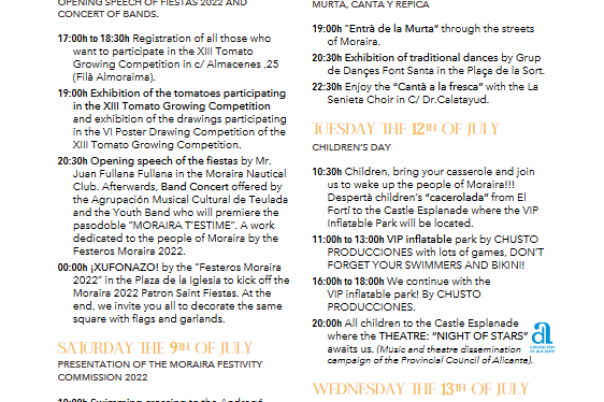 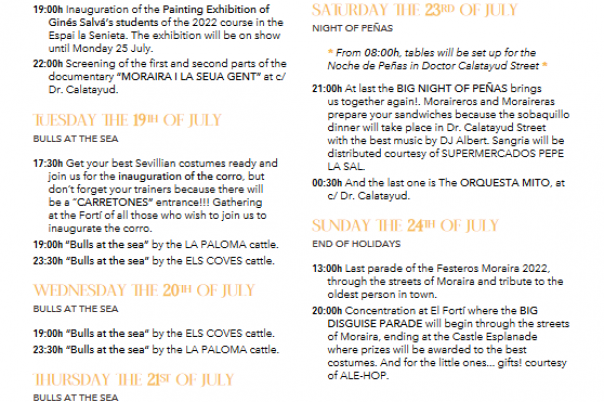 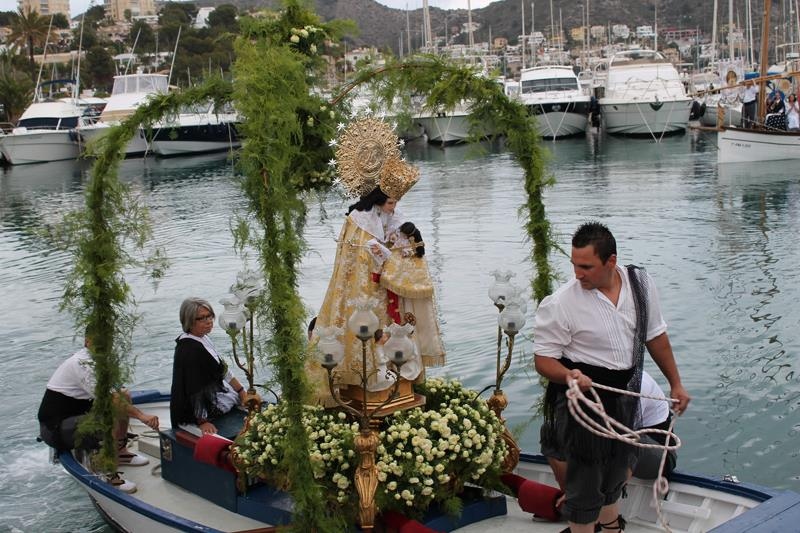 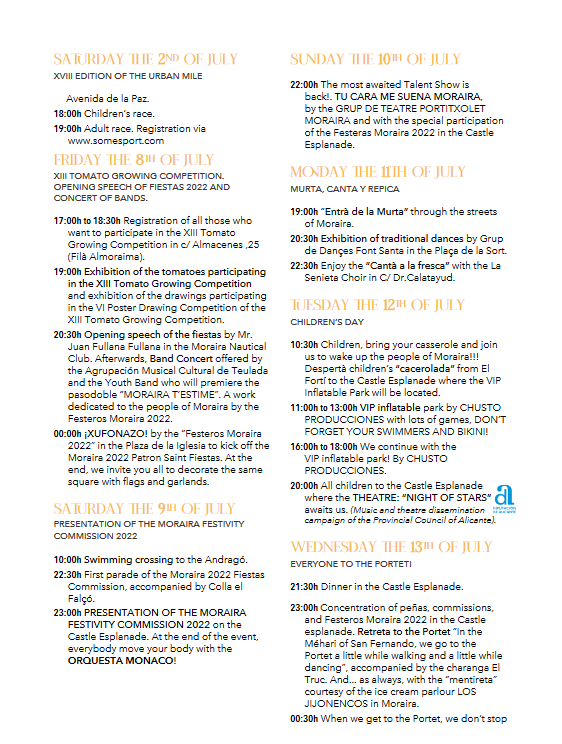 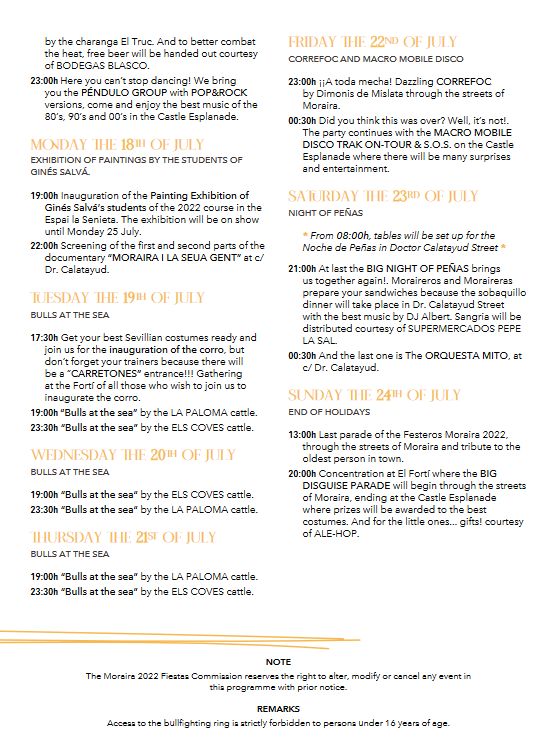 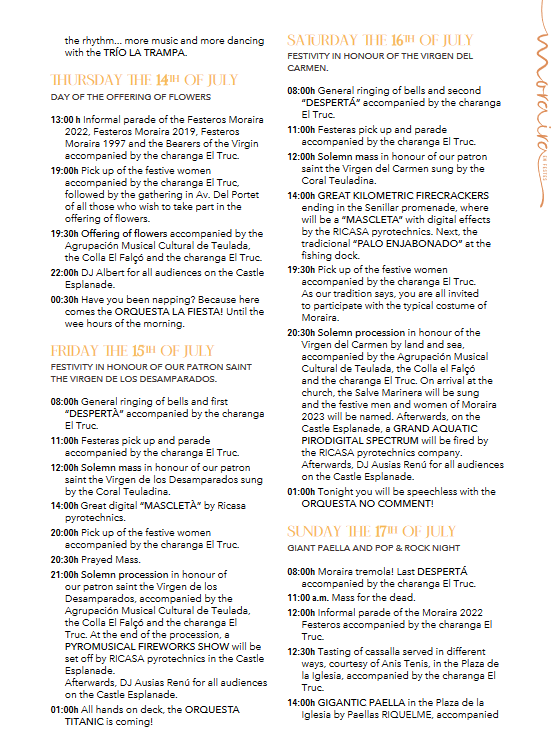 The celebrations last around 12 days, starting with a traditional walk to the El Portet beach and the popular open-air dance.

The parade with firecrackers and music, l’Entrà de la Murta announces the start of the festival.

July 14 is the day of the Flower Offering.

On July 15th, the Day of the 'Virgen de los Desamparados', patron saint of Moraira, a solemn sung mass is celebrated, as well as a great Mascletà - daytime fireworks -, the procession in honor of Nuestra Señora de los Desamparados, and the firing of a fabulous Piromusical fireworks display.

On July 16th, the Virgin del Carmel is honored with the solemn mass, a spectacular Mascletà, the maritime procession of the Virgen del Carmen and the grandiose water fireworks display.

Every night you can enjoy great Pop orchestras in the Esplanade of the Castle where everyone can dance beside the sea!

After the religious acts there are have 3 days of "Bous a la Mar" - bull running - in the bull ring installed in the port.

There is also have a day dedicated to children with inflatables, water games, children's theater and many more activities for the little ones.

The festivities end on the weekend, the last Saturday the Night of the “Peñas” -group of friends- is celebrated with a popular dinner and open-air dance.

On Sunday the committee invites everyone to the Giant Paella, and in the afternoon, a costume parade.

Saturday 9th July: Fiesta Committee Presentation
10:00   Swimming event from the Castle to l'Andragó Beach. Registration available at www.somesport.com.
22:30   Parade of the "Festeros" accompanied by the band El FalÇó.
23:30   Presentation of the Moraira Fiestas and procolation by Don Juan Vidal on the Esplanade by the Castle. The evening ends with the year's first Macrodiscmovil (mobile disco) with an impressive dance floor an several DJ's.

Monday 11th July: Reap the Harvest
19:00   Reaping of the harvest through the streets of Moraira
20:30   Traditional Dances - presentation of the dancing chorus, La Font Santa Teulada in the Plaza de la Sort.
22:30   Enjoy the "Canta a a fresca" with the La Senieta choir in Calle Dr Catalayud.

10:30 Children's "cacerolada" - waking up the village with Casserole Pans!! Procession from El Forti to the Catle Esplanade where the VIP Inflatable Park is located.

21:30 Dinner in the Castle Esplanade

23:00   Meet on the Esplanade by the Castle to dance down to El Portet Beach. "Mentireta" offered by the ice-cream store, Los Jijonencos, Moraira. Stay to dine and there will be "Cocas" for everybody, with Sangría offered by the supermarket, Pepe La Sal. Following this, dancing continues.

13:00   An informal parade of the "Festeros", including the "Festeros 1993" and people carrying the Virgen de los Desamparados (Virgin of the Homeless), accompanied by the band Bataclán.
19:00   Fetching of the "Festeras", accompanied by Bataclán. Those wishing to particiate in the flower offering meet at the Avda. del Portet.
19:30   Flower offering with the drummers, La Mediterránea Moraira, the Teulada music group, the Colla de dolçaines i tabalets El FalÇó, and the band El Truc.
22:00   Musical DJ for all ages and tastes at the Castle Esplanade
00:30   Performance by the band, ORCHESTRA LA FIESTA

Saturday 16th July: Festivity in Honour of the "Virgen del Carmen"
08:00   Early wake-up call.
11:00   Fetching of the "Festeros" and parade accompanied by the band EL TRUC.
12:00   Solemn celebration of the Holy Mass in honour of the Virgen del Carmen. The choir (Tueladina) sings.
14:00   "Gran Traca Kilometrica" - a miles-long firecracker performance anding at the Paseo del Senillar, followed by the traditional "palo enjabonado" (soap sticks). The winner receives a prize at the Fisherman's Pier.
19:30   Fetching of the "Festeras" and parade with the band EL TRUC. Everyone is asked to abide by tradition and wear typical costume of Moraira.
20:30   Holy procession in honour of the Virgin del Carmen on land and sea, accompanied by the Agrupación musical Bataclán, the Agrupación Musical Teulada, and the Colla El Falçó. Upon arrival at the church, we sing Salve Marinera and the Festeros will be appointed. Next, there will be an Aquatic Firework Display on the Esplanade by the Castle. Also at this time is the traditional floral offering in the enclosure of the fishing port. Devotees are asked to provide bouquets for the offering.
01:00   Performance by the band NO COMMENT

12:30 Tasting of cassalla served in different ways, in the Plaza de la Iglesia 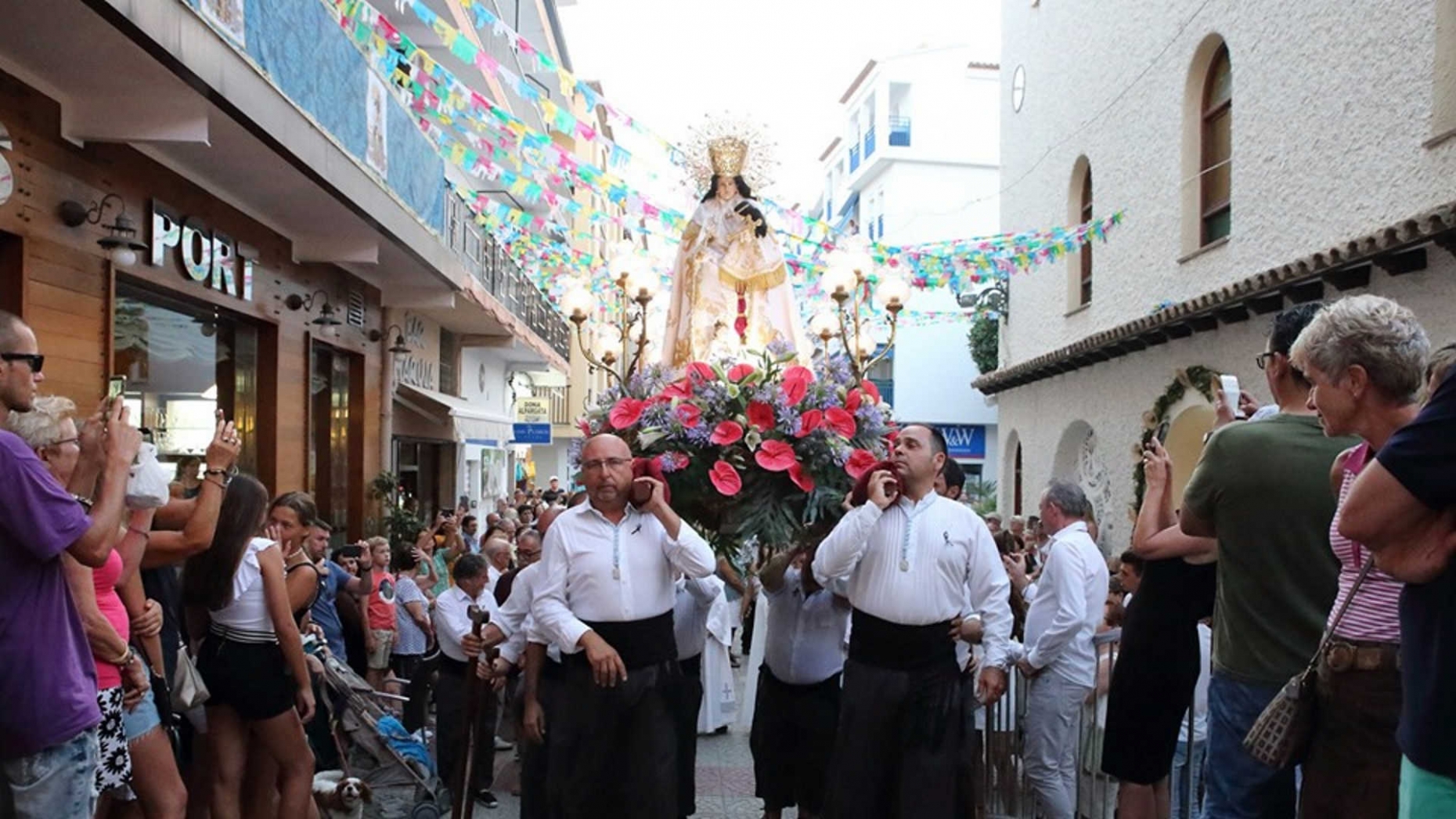 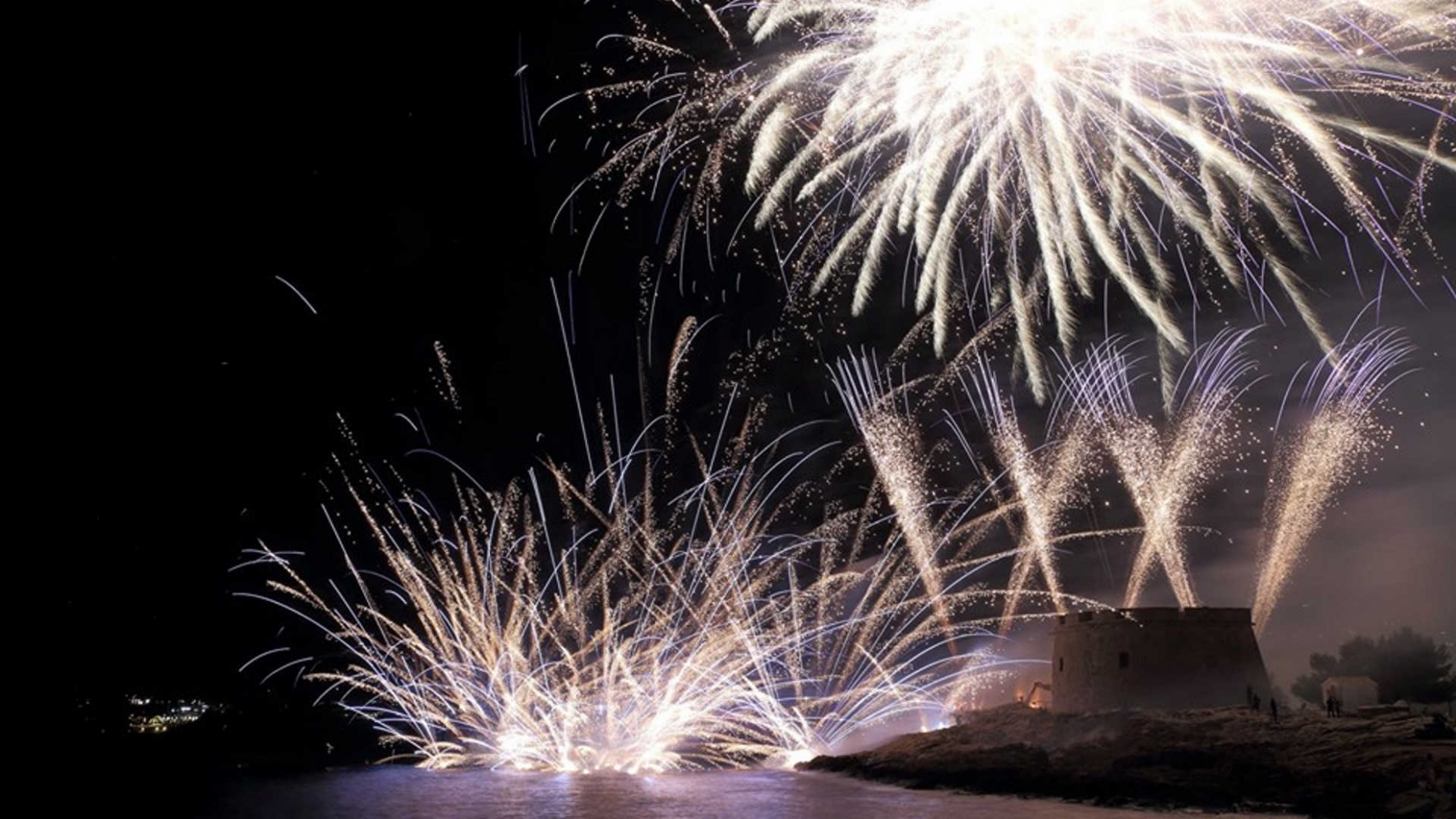 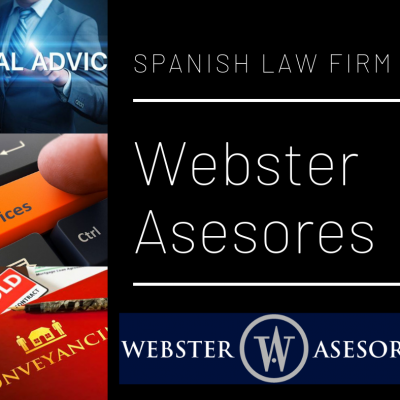 Webster Asesores is a Law Firm and Tax Consultant... 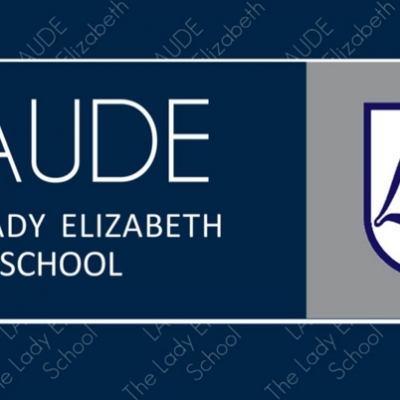 A school with a very high reputation, from nursery... 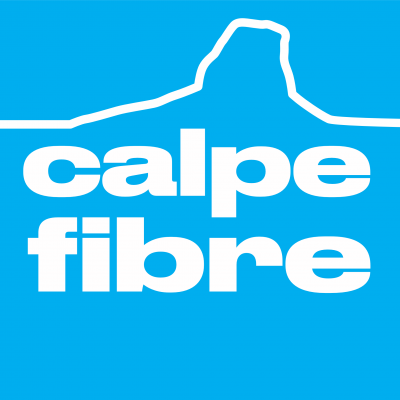 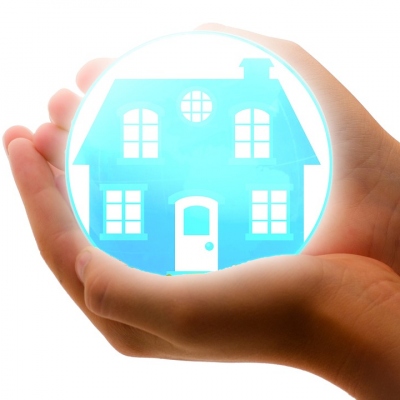 Costa Insure Javea is an insurance broker based in...